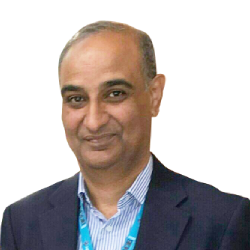 Dr. Rajeev Vyas is on the Board as a member of the Society. He was born in Bikaner (Rajasthan) in 1960. He received his B.E. and M.E. in Electrical Engineering from University of Jodhpur, Jodhpur, India, in 1983 and 1987, respectively. Thereafter, he worked as a project engineer at a 220 KV Grid Station, in India from 1984 to 1986.

Dr. Vyas has 25+ years of experience working in automotive industry. His past employment includes Delphi, TRW, and Bosch. Dr. Vyas has been working at General Motors (GM) as a Global Technical Specialist since 2007. At General Motors, he is responsible for all electric motors in GM vehicles, and has been awarded the GM Production Usage Award. Dr. Vyas is a Senior member of Institute of Electrical and Electronics Engineers (IEEE). He is active in IEEE Electric Machines Society and has held numerous positions - he is currently the Associate Editor of Transactions of Industry Applications Society. Dr. Vyas has several publications in the IEEE Transactions and holds 10+ United States granted patents. Dr. Vyas’ current research interests include design, analysis, and development of electric machine systems, drives, as well as finite element analysis.