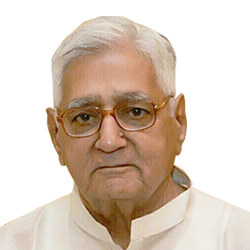 Honorable Shri Govindlalji Vora is the Chairman of our society. He is a visionary who scaled new heights through his contributions to journalism, literature, education, politics and social causes.

Born in Nagaur, Rajasthan in 1932, he was the second child of Shri Mohanlalji Vora and Smt. Ambadevi Vora. He moved to Raipur, Chhattisgarh at a young age and was brought up there. He finished his matriculation from Raipur in 1950 and further went on to complete his Masters of Arts (M.A.) in Political Sciences from Sagar University, Madhya Pradesh in 1956.

Writing has always been his passion, so much so that he became a freelance journalist at a young age of 18. In his twenties, he was regularly writing for all the big and esteemed media houses at that time including the Hindustan Times, Nav Bharat Times, The Statesman, Illustrated weakly, Telegraph and Jai Hind. His writing style started to strike a chord with the public as he always called a spade a spade. So in 1959, it came as no surprise that a leading newspaper of undivided Madhya Pradesh appointed a young 27 years old Govindlal Vora as its Chief Editor. He was one of the youngest Chief Editors across the country at that time. He held the post of the Chief Editor until 1984.

An intriguing thing about Shri Govindlalji Vora’s writing style is his proficiency in both Hindi and English literature. In his twenties, he was regularly writing articles for both English and Hindi daily newspapers. In 1975, he also became the Chief Editor of Deccan Chronicle, an English daily newspaper. Through 1975 to 1984, he was the only person in the state, and probably one of the very few people in the country, who was simultaneously a Chief Editor for both a Hindi and an English newspaper. He also established an international reputation as some of his articles featured in renowned international dailies like Wall Street Journal (WSJ) and New York Times.

On October 1st 1984, he started Amrit Sandesh - his own Hindi daily newspaper. He is serving as it’s Chief Editor from 1984 until now. It is another one of his big achievements that he established Amrit Sandesh as one of Chhattisgarh’s well known newspaper.

Naturally, he was continuously recognized for his outstanding work in the field of journalism. He was awarded the Mehsoor Hindi Sahitya Parishad award and Pt. Haridutt Sharma Award. He was also invited to be a part of eminent journalists from print and electronic media who accompanied Prime Ministers like Smt. Indira Gandhi, Shri Rajeev Gandhi, Shri Chandra Shekhar, Shri Atal Bihari Vajpayee and Shri P.V.Narasimha Rao on their visits to summits and conferences in various countries. He went to London on Commonwealth Heads meeting in 1986, Geneva (Switzerland) in 1985 on 71st International Labour Conference, Belgrade in Yugoslavia for the 9th Non-Aligned Movement Summit in 1989, Katmandu SARC Summit in 1987 and Washington DC for U.N. General Assembly in 1987. Latest of his visit was with Dr. Manmohan Singh on the G-20 Summit held at Pittsburg U.S.A. in 2009.

He was also a part of several journalistic organizations including the International Union of Journalists and the news agency UPI. He was one of the founding members of Indian Federation of Working Journalists Association and he was in the Board of the Indian Newspaper Society from 2006-07 to 2009-10. He also served as the President of ILNA (Indian Language Newspaper Association) and AINEC (All India Newspaper Editors Conference).

In addition to his love for journalism and literature, Mr. Vora dedicated his life to improve the standard of education in Chhattisgarh. He played a major role in starting the Department of Journalism in Ravi Shankar Shukla University (R.S.U.) in Raipur, Chhattisgarh. He was the first HOD and Teacher of the Department. Further, he went on to lay the foundation stones for Pragati College, Pragati College of Engineering and Management and Pragati Goenka International School, Raipur. He also served as the President of several societies like Chhattisgarh Educational Society, Rastriya Vidyalay, Daga College, Mahant College, Chhattishgarh College and Lakhe School.

Shri Vora strongly believed in giving back to the society. He involved himself with several organizations working for social causes. He served as the President of societies like Chhattisgarh Charitable Eye Hospital, Bal Ashram Orphanage, Gram Seva Samiti, Vidya Mandir Samiti, Krishi Gau Rakshani Samiti, Shiv Dharam Shala Trust, Pt. J.L.Nehru Cultural Trust and Choubey Colony Co-Operative Society. He was also the District Governor (D.G.) of Rotary Club for M.P., Chhattisgarh and Orissa. His contributions to the society that he made being a DG in the Rotary Club is always remembered. He made several foreign visits to countries like U.S.A., U.K., Russia, Germany, France, Greece, Italy and Japan as a D.G. of Rotary.

Following the socialist ideology, Shri Govindlalji Vora also became a political analyst and strategist in the early 70’s. Later, he joined the Indian National Congress (INC) and became a member of the All India Congress Committee (AICC) and Vice President of Chhattisgarh Pradesh Congress Committee (PCC).

His elder brother Shri Motilalji Vora is Member of Parliament, Rajya Sabha and Treasurer of AICC & his nephew Arun Vora is Member of Legislative Assembly from Durg. His wife Prakash as he says has always been his strength. Sons Girish & Rajeev are now slowly taking over the legacy and daughters Vandana, Ranjana & Vibha along with their married life are putting in the best of their contribution to the society like their father in their concerning field.